IELTS stands for International English Language Testing System and is a test of English language proficiency respected and accepted across the world for education and migration needs IELTS test assesses English proficiency of candidates seeking international education, training or work in English speaking countries. Its testing methods focus on the candidate’s practical ability to use English in real-life situations. 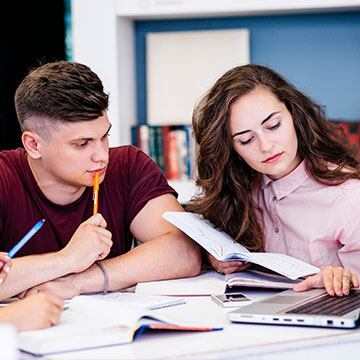 Since its introduction in 1989, IELTS preparation has become one of the most trusted forms of English-language assessment and is accepted by over 8,000 universities, employers and immigration organizations worldwide. IELTS training is an internationally recognized system for testing English language ability in four categories:

IELTS is a globally accepted test and is viewed as a compulsory criterion for admission into academic institutions in the United Kingdom, Canada, the United States of America, South Africa and New Zealand. IELTS test is co-owned by British Council, University of Cambridge ESOL examinations & the IDP IELTS Australia

Note: Once graded, your IELTS score is valid for two years. It uses a nine-band scale to clearly identify levels of proficiency, from non-user (band score 1) through to expert (band score 9).

PTE which stands for “The Pearson Test of English Academic”is a computer based secure English Language test which assesses the four key language skills of listening, reading, speaking and writing and is trusted by universities, colleges and governments around the world. The test is administered in association with the world’s largest examining body Edexcel. It is the most unbiased proof of a candidate’s English skills. PTE Academic Test delivers a real-life measure of test taker’s language ability to universities, higher education institutions, government departments and organisations requiring academic English. PTE Academic assesses real-life, academic English, so you will hear excerpts from lectures and view graphs and charts. You will hear a range of accents in the test, from British and American to non-native speakers, so you will be exposed to the type of accents you will encounter in everyday life.

PTE Academic Exam offers all test takers incredible flexibility. Candidates can schedule their test as little as twenty-four hours in advance, and typically receive their results within five business days.PTE Academic test is scheduled in over 50 countries worldwideand offers global testing in more than 250 test centers.Artificial intelligence (AI) is applied to grade the results.

AI scoring means that it’s not simply a single human assessing your English language skills, but a very clever algorithm that mimics how human markers would score, based on different responses.

PTE Academic Exam is approved by the Australian Government for visa applications and accepted by thousands of institutions in the UK, Australia, the USA, Canada, New Zealand, and Ireland, including prestigious institutions such as Harvard Business School, INSEAD and Yale University.

PTE Academic is accepted for student and migration applications across the world. In addition to its unbiased approach to testing, the test has many unique advantages.

To take the PTE test, you need to go to a secure Pearson test center where you’ll be given with a computer and a headset to get on all the four modules. While speaking and writing modules are combined in one session, listening and reading have separate sections. Ranging from MCQs to essay writing, and reading out the sentences to choosing a proper word, there are twenty types of question formats.

PTE test is based on real-life academic and general content. You will come across graphs, summaries, excerpts, and many more items that belong to things around you. The test also contains accents from both native and non-native speakers exactly that you hear on the television, movies, and real conversation encountered in day-to-day life.

In order to take the PTE Academic test, the